Musings on my First Worldcon

Musings on my First Worldcon

Last week I flew to the far-off land of Kansas City, Missouri, to partake in what many science fiction fans consider a pilgrimage: I went to the annual World Science Fiction Convention—otherwise known as Worldcon.

Left Victoria under sunny skies. 20 minutes later I land in this. Oh Seattle, you never change. 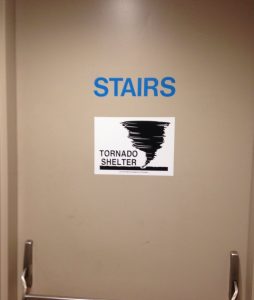 Just got registered at WorldCon, and was immediately reminded that different forces of nature can kill me here.

Home of the Hugo Awards—which continually fight it out with the Nebula Awards for rights to call themselves the MOST PRESTIGIOUS science fiction literary awards—Worldcon is a pretty big deal. I packed all my geeky shirts (Dr. Who, Firefly, Stars Wars, and Game of Thrones), brushed up on my nerdy arcana, and arrived with camera phone ready to capture all the cosplay and crazy stalls selling everything from Pokemon stuffies and Sailor Moon dresses to real-life broadswords and actual chainmail. 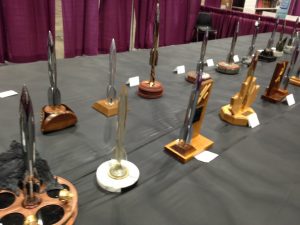 Hugo Awards through the ages!

Now, I’m not a fresh-off-the-applecart kind of con-goer. I’ve been to local cons, like VCon in Vancouver, and I was thrown way out into the deep end with the massive Phoenix Comicon last year. So having seen the extremes, how did Worldcon compare? It was big, but not labyrinthine. It had some quirks, but nothing zany. I got a few compliments on my shirts, I saw some cosplayers and a few modest stalls selling artwork, jewellery, and books, and I don’t think I ever once got into a furious argument with anyone about whether Kirk acted recklessly in Episode 47. (We universally agreed, however, that Han Shot First.) 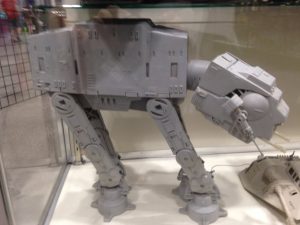 So in the end, I was comfortable meeting World Con somewhere right in the middle on the SF convention spectrum. There were lots of people, and lots of fun, but nothing to make a casual onlooker get spooked. And there was plenty to do, from morning walks with the stars (famous authors) to the evening Bar Con events. There was the Hugo Awards ceremony itself, of course, but most of each day was spent going from one fascinating panel discussion to another. These ranged from the presentation of full-on academic papers (on anime, no less!) to fan-led discussions on the popular legacy of Star Wars. 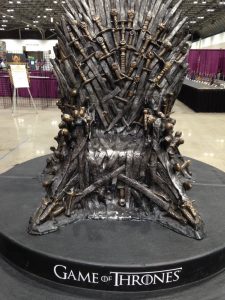 I’ve found the perfect office chair. I wonder if swords still bother Border Security when welded into a throne?

I myself mediated a very entertaining panel called “We Don’t Need Another Hero” and participated on two others. “Political Worldbuilding in SF” was a very intellectual discussion to a standing-room-only audience where we examined the creative process of building the future or alternate world, which supports the story. In contrast, “What’s New in the World of Dinosaurs” was a raucous affair, also to a full house, where five SF authors tried to present ourselves as somehow knowing something more than our audience about dinosaurs. There wasn’t a paleontologist in sight, and probably a good thing, too. 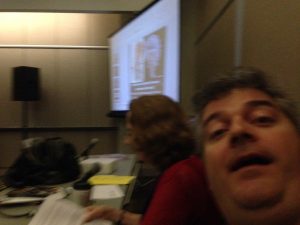 Trying to take a selfie just before we start the Dinosaurs! Panel

For me as a relative newcomer to the professional author scene, it was a thrill to be able to mix it up with some of the biggest names in science fiction. George R.R. Martin, Greg Bear, David Brin, Joe Haldeman, Cory Doctorow, and William C. Dietz are just some of the shining stars in the galaxy of talent I had the chance to meet. 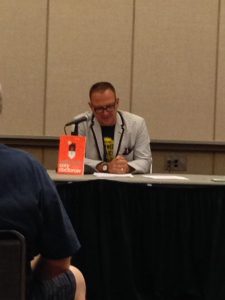 Cory Doctorow doing a reading from his upcoming book – can’t wait for the release!

It was meeting all these authors, and seeing how they were the real centrepiece of the week, that made me realize what really distinguishes Worldcon from the mega-cons like Comicon and Dragon Con. Worldcon is all about books. Yes, TV and movies are welcome, but Worldcon has never forgotten the fact that it is a literary celebration. It exists to bring together the fans of books and the authors who write them. This is very special, because it’s easy for books to get out-glamorized by the visual spectacle of Hollywood, HBO, and Marvel. At the other big cons there is always a literary element, but you have to look hard to find it amidst all the TV star autograph sessions, exclusive releases of the next superhero movie, and legions of stormtroopers in the corridors.

All this worked to create a comfortable, collegial atmosphere for everyone at Worldcon. Famous authors could walk freely in the exhibition hall and the conference corridors, mixing easily with fans and creating an accessibility and intimacy that is impossible to replicate at a mega-con. I myself, as a fairly junior member of the professional club, was welcomed as a peer—there was no “pecking order” of A-List celebs and then the rest of us.

So, Worldcon gets a thumbs-up from me. It was big enough to draw in the industry’s heavy hitters, but still small enough that I would bump into the same folks each day. Call it the Goldilocks of cons. I look forward to our next encounter.